Hanford Mills Museum’s exhibit, Rural Genius: Innovation, Invention, and Ingenuity in the Mill’s Community, tells the story of three inventors: George Paradox Hill, William Mickel and Larry MacClintock. Through the examples presented by these inventors, the exhibit explores the ways individuals seek to create, advance and respond to technological change. Rural Genius also challenges visitors to think about what makes an inventor or an invention, and reminds us that innovation can come in many forms and may even be found in our own backyards.

The three local inventors featured in the exhibit are: William Mickel, a cooper from Oneonta who in the 1870s designed a machine that could produce barrel heads in less time; Larry MacClintock, an East Meredith dairy farmer who built a machine for cutting, drying and baling hay to save farmers time and money; and George Paradox Hill, a laborer at the Mill who dedicated his life to creating a perpetual motion machine and other inventions. 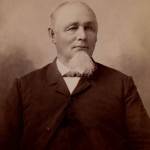 William Mickel held the patent on his barrel head cutting machine, which included a unique solution to cutting and beveling the butter tub covers, but sold the rights to use the patent to other manufacturers. The pattern was originally designed to be operated by a hand crank, but eventually incorporated a flat belt system that could be powered by waterwheels or steam engines, like the one that is operated at Hanford Mills today.

George Paradox Hill, who worked as a day laborer at the Mill, believed he had invented a perpetual motion machine. Local papers as well as the national Scientific American magazine published his assertions, and he often gave lectures on this machine and his other inventions. Though the laws of physics make clear that perpetual motion is not possible, Hill maintained he had invented a limitless source of power.

Efficiency is what drove the invention of Larry MacClintock, who grew up on and then ran his family’s East Meredith dairy farm. He built a machine for cutting, drying and baling hay that saved farmers time and money. He obtained a patent in 1965.

“By telling the story of these three inventors, we hope to inspire people to share their stories of ingenuity,” says Liz Callahan, the Museum’s executive director. “Inventors, tinkerers and dreamers play an essential role in society, and with this exhibit we celebrate the drive to invent, create and improve.”